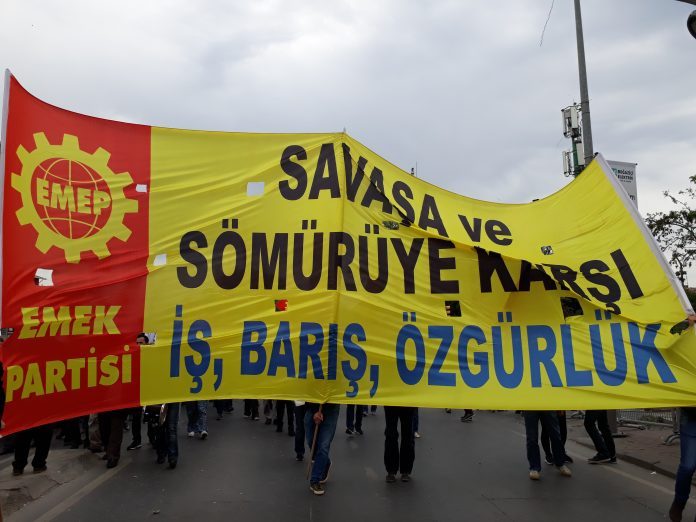 Today is December 18th, International Immigrants Day. The issue of immigration and immigrants, which is the litmus paper of humanity, is not an issue that can be passed over with the protocol celebrations of the capitalist states and their agencies. The working class and labourers cannot and should not allow this.

That is because those who cause immigration, those who put the world in tears, those who exploit the labour of immigrants for a whole year and compete in racism cannot celebrate the “immigrants day”!

Immigrant workers, whose numbers have increased in recent years and who have been driven to capitalist production wheels without considering pandemic or epidemic, are now part of the working class of Turkey.

We salute all our immigrant and refugee brothers and sisters in Turkey and other countries as Emek Parti (The Labour Party).

Our party deals with the “problem” of immigration and immigrants on a class basis and calls all workers regardless of local or immigrants to a common struggle for rights.

We bring to the public attention the 10-article determinations and warnings prepared by the EMEP Migration and Refugees Office.

IMMIGRANTS AND URGENT STEPS REQUIRED TO BE TAKEN IN 10 ARTICLES

1-           According to the figures announced by the Department of Economic and Social Affairs (DESA) of the United Nations, 272 million people were displaced in the world due to war, poverty, drought and disease. The increase in the refugee/immigrant population is now higher than the general population growth and reached 3.9 percent of the world population. The number of immigrants and refugees in Turkey has exceeded 5 million. The main reason for the displacement of people is imperialist policies of plunder and exploitation.

2-           While global wealth accumulates in the hands of a handful of monopolies, poverty is shown as the fate of the peoples, and people are declared “illegal” since they had to migrate from their own countries. Those who are illegal are not immigrants, but capitalist states that violate their own law, especially the 1951 Geneva Convention. The central capitalist countries, with the EU and the USA being in the lead, have almost started a war against the immigrants. Examples of this are boats sunk in the Aegean and Mediterranean, skewered boats, barbed wire in Europe, deployed soldiers, walls built on the border of the United States and Turkey. It is the duty of workers, labourers and the peoples of the world to solidarity with refugees and to defend international immigrant rights.

3-           Another driver of immigration is the need for capitalist production and cheap labour exploitation. As seen in the “EU Migration and Asylum Pact” agreed at the end of 2020, capitalist monopolies aim to block immigrants in “immigrant depot” countries such as Turkey and Libya. In the other part of the plan, migrants are trained as skilled labor and filtered into the mechanism of exploitation. The exploitation of unskilled migrant labour in heavy and dangerous work branches has intensified. Capital powers use precarious immigrant labour to provoke competition within the working class, to break up union structures and to increase pressure on laborers. Against this, worker internationalism and common rights struggle are the only way out.

4-           In the 10th year of the Syrian war and therefore immigration, refugees seeking refuge in Turkey are still not considered refugees. While the “temporary protection identities” make the temporality almost permanent, the AKP government is persistently avoiding a permanent solution. The refugee population is seen as a trump of pressure and blackmail on the EU and is kept in reserve as a means of strategic goals regarding Syria. However, refugees and immigrants are human beings with their rights. The imposition of the subjects and guests should be stopped. During 2021, the 10th year of immigration, the causes of war and immigration should be discussed by the peoples, and unity and brotherhood against imperialism should be brought forward. Accordingly, safe conditions should be provided for Syrians who want to return, and the infrastructure of coexistence with refugees who want to stay in Turkey should be established.

5-           In Turkey, there are close to 1 million immigrant workers who are driven into the cheap labour market alongside Syrian refugees. Immigrant workers, whose passports are confiscated by networks, marketed by private employment offices, and whose prices are announced through their social media accounts, are increasingly involved in cases of occupational accidents and job murders. The relentless exploitation of immigrants is accompanied by their illegality. Opposing the ruleless working order is the problem of the entire working class, domestic or immigrant.

6-           The immigration route has been on the Van-Iran border for some time. The number of immigrants who freeze to death under the snow in winter and drown in the lake in summer is in a remarkable increase. Immigrants who are victims of international immigrant traders, bosses demanding cheap labor transfers and states that cooperate with them are our brothers and sisters. This slaughter is unacceptable. Noting the report of the Migration and Asylum Commission of the Van Bar Association and the visits of the Van Refugee Solidarity Network, our party is calling on the Turkish public to be more sensitive.

7-           Immigrant workers, who are in a tight strait with the economic crisis, are in danger of starvation in pandemic conditions.   Access to health care is often not possible due to unregistered work. To make matters worse, a chaperone exchange has been created for Covid 19 patients. Female immigrant workers are being sent to intensive care units. In general, immigrant cases cannot be detected in coronavirus disease and related deaths. Therefore, the social and economic protection of immigrant workers has become important in the pandemic conditions. In addition, the case of Syrian Ali Al-Hemdan, a textile worker who was killed by a police bullet during the pandemic, should be conducted transparently and the policy of impunity should be abandoned. Computer and internet support for refugee and immigrant children for distance education should be provided urgently and the language barrier in education should be overcome.

8-           Racist attacks, hate speech, and othering practices against refugees and immigrants in Turkey are in a rising momentum. Bourgeois chasm propaganda, which has the opportunity to increase crisis and poverty, is turning domestic and migrant workers against each other. The antidote to racism and chasteism is unity, struggle, and solidarity with immigrant workers against epidemic, exploitation, and war.

9-           The health and nutrition problems of refugee and immigrant women have become more severe with the epidemic. The language barrier and the lack of adequate health workers make access to health difficult. For migrant women who are not under temporary protection, health rights are out of the question! During the obstetrics and gynaecology process, the rhetoric of “You bring a child every year” increased. Violence against women increased as unemployment intensified the crisis at home. Immigrant women should be provided with social and economic protection without further delay.

10-         In Turkey, the asylum system has been replaced by harsh repatriation practices. People held in Repatriation Centres (GGMs) face rights violations. Finally, the rape of immigrant women at Van Kurubas GGM shows the gravity. Therefore, GGMs should be inspected urgently and converted into “immigration and asylum admission centres” without delay. Refugees fleeing the autocratic regime, especially in Iran, face the threat of execution in the process of being sent back. The right to life of political refugees must be guaranteed and international agreements to which Turkey is a party must be complied with.