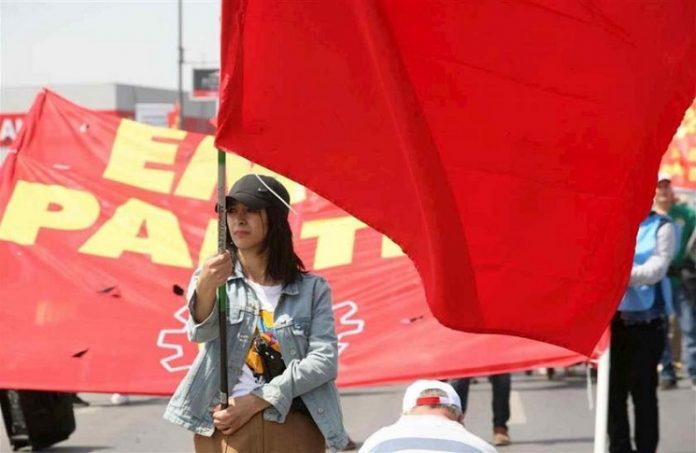 It has been a month since the first incidents of Covid-19 emerged in our country, and this has laid bare for all to see the scale of inequality, discrimination and exploitation on which this regime is based.

All of the support packages announced respond to the needs of capitalists and employers.  The rights that working people and women have fought for years to protect are being usurped in multiple joined up legislative measures, government circulars, and are being lost between the lines in additions to current bills. Not only are the working classes given no share in the wealth and value they create, but they are also being robbed of the funds built up through their labour. The one man regime is ignoring the needs of demands of the working people, the exploited, the unemployed and women. The most urgent and basic demand for all but the most essential production and service sectors to close and for workers to be given paid leave has fallen on deaf ears.  The public are being forced to decide between hunger or the risk of catching the virus. A further 4-5 million more people have joined the avalanche of unemployed in the country in the last month, and the right to life for millions of men, women and their families is left to fate/virus.

There is no evidence that anybody has been able to access the social support that the government has begrudgingly repeatedly announced it would be making available.  On the contrary we can see that the public have been left wasting away at local authority doors without anybody to address their concerns, empty handed and desperate. The video of a Romany woman’s lament when she was unable to access help and an official shouting at her to “die”, shows in the most brutal and clear way that the foundations of the system we live in are based on profiteering from economic, social and political resources, and that the public is not seen as worth protecting.

Women experience the worst of the inequality and poverty prevalent in the country, and are the most vulnerable. Women employed as cheap labour in insecure, gig and temporary jobs tend are mostly employed in food, agriculture and the service sector. Most of the 1 million domestic worker women in Turkey are employed without any formal employment contract in temporary and insecure conditions. With this pandemic they have been faced with losing their jobs completely. It is clear that many more women sacked from their jobs as a result of the pandemic will join the almost 2 million unemployed women, and together with women forced to take unpaid leave will be pushed back into their homes where they face poverty, hunger and no protection from violence. For those women still working, they are working under poor and unhealthy conditions and face the constant risk of losing their jobs. There has been an increase in violent, oppressive and sexist behaviours. Women workers are also being forced by their managers to take responsibility for the “hygiene” in their workplaces alongside their regular responsibilities. The fear of being dismissed is leading to an increase in sexual assault and degrading treatment of women in the workplace. The fear of being first in line for dismissal and having to be even more reliant on parents or their husbands economically is a growing anxiety for women.

The lives of women health care workers are at risk

Women who make up 70% of health workers are the most impacted by the pandemic due to their busy work schedules and the new risks in their workplaces as a result of the virus. Health care professionals are still not being routinely monitored for the virus. Women working in the health care sector are very anxious because of the increasing workload in hospitals, the risk of catching the virus, taking the virus home and because of the lack of preventative measures in place. The risk to their lives is significant. Similarly outsourced cleaners and canteen staff in hospitals also face these risks because of lack of preventative measures, and they also face discrimination whilst at work because – as one woman worker put it- they are treated as if they themselves are a virus.

As of May, the number of seasonal women workers in Turkey in the agriculture industry will increase. Without critical financial and other support the pandemic could be disastrous in places where there aren’t even simple necessities such as clean water, accommodation and appropriate facilities to meet dietary needs, and where even the basic of precautions are not taken.

Violence against women has increased

The concern that violence against women would increase in the absence of special preventative measures being put in place has unfortunately become a fact in the course of the past month.

What we have seen in working class communities is that women are abandoned in homes where their lives at risk, no helping hand is provided from the state at any level,  the pandemic is being used as an excuse to refuse help to women seeking help, that violence is increasing and is being concealed because of the lack of preventative measures by the state. While violence increases, instead of taking measures to protect women, the High Council of Judges and Prosecutors took a decision on clause 6284 in the legislation for preventing violence against women which disadvantages women at risk. In spite of this reality, the Minister for Family Affairs announced that “violence is falling” – this is entirely false!  Women can see that the Minister has closed her eyes to the reality and has chosen to paint a rosy picture, but they can also see that this two- faced approach is at the expense of their lives and they are angry!

Women, who are already subject to hunger, poverty and marginalisation, and who make up the most at risk section of the millions who are not valued enough to, also have an increasing domestic burden. Unpaid leave, unfair dismissal and the usurping of their employment rights amplify the poverty and disenfranchisement of women, and heighten their fear for their future. The government, which has failed to put in place any measures for paid leave or effective and widespread financial support, has put women who care for their children alone in a life critical dilemma by banning people under 20 from leaving the home. Women who are lone parents, going through a divorce or living with an injunction in place are faced with even more hardship as a result of the pandemic.

The right to health care must be protected

Years and years of neoliberal policies through which the health service has been privatised and marketed have led to the destruction of preventative public health and lack of prioritisation of prevention and cure of contagious illnesses; as a result public are experiencing serious hardship.  Like in many other countries, the default position was to pave the way for “herd immunity” on the pretext that the health system does not have sufficient capacity and this was even before the situation was clearly understood, as a result of delayed measures and the insincerity of the government’s calls for people to stay at home became clear. Moreover, women without social security or on insecure and low income that is insufficient for quality health care face even bigger difficulties accessing health care. Women subject to violence are unable to access even the most basic medical assistance due to the risk of contracting the virus in hospitals and because of hospitals prioritising the need to fight against the pandemic. Women’s health is also put at risk due to the delays in accessing family planning, pregnancy monitoring, anti-natal and pre-natal support, parent-child health services, chronic illnesses, and health concerns relating to menopause. In particular, the right to an abortion had already been severely curtailed and this right has been further limited.

Refugee women are the most vulnerable and with the pandemic have become even more invisible and have been condemned to poverty, violence and deprivation of their rights. In camps, tents, containers and slums they are trying to live in difficulty and unsanitary conditions. Often they are unable to access clean water and soap, and because of widespread scapegoating are forced to live in the most dire conditions.

Migrants and refugees do not receive any support from any local authority. Neither do social organisations and solidarity trusts, nor town or district authorities provide much needed assistance. Migrant women are unable to make use of any violence against women support, including SONIM (violence prevention and monitoring centres).

We have seen that the state utilises available apparatus against the people. We have also seen how the incompetently managed two day lock down was openly flouted even by factories not producing essential goods and how employees were forced to go work.

The government, which has over the years imprisoned opposition from all groups and professions, continues to keep imprisoned journalists, politicians, rights campaigners, and democratic opposition, and turns a blind eye to inmates with medical needs or children growing up behind bars. Instead the government introduced a wholly discriminatory and unequal prison policy which released criminals convicted of sexual and violent crimes with no monitoring. This policy undermines the right to life, leaves women and children wholly unprotected against those seeking to harm them and is practically an invitation for more deaths, violence and abuse.

The Covid-19 pandemic has shown again that the people of Turkey need a political regime which allows them to live humanely, not the continuation of the current unequal and barbaric exploitation.

Only the working people who are the producers of all life can create a society in which people can live and work humanely. The Labour Party’s raison d’être is this! The Labour Party calls on workers and all men, women and youth to unite. Join the struggle, stand in solidarity and organise.

Of course, new means and forms of solidarity and organisation are growing in the context of a pandemic which makes social distancing necessary. We know that women are able to stand strong and survive by resisting wherever they may be, in their work places and in all aspects of their lives; we are coming together to grow this solidarity and establish resistance groups where we live and in our workplaces.

Turkey’s one-man rule has only issued policies benefiting the owners of capital during this pandemic, all of which have been against the interests of the working class and masses. In opposition to these policies, we reiterate the fundamental demands of the working class:

THE LABOUR PARTY OF TURKEY (EMEP)